It’s counter-intuitive, but not signing a commercial contract with BioNTech and refusing US federal funding were two of several moves Pfizer made to speed up development of its COVID-19 vaccine, CEO Albert Bourla says. Now it’s looking to supply low- and middle-income countries. 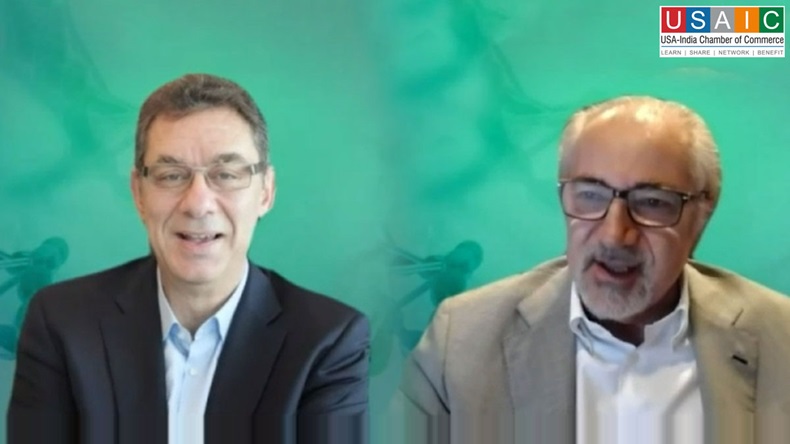 Pfizer Inc.’s shaping of its own "Operation Warp Speed" while developing a COVID-19 vaccine is a fascinating story of trust, commitment and organizational preparedness, one well narrated by CEO and chairman Albert Bourla at the USA-India Chamber of Commerce’s annual Biopharma & Healthcare Summit.

With the world “collapsing in front of us” on account of the pandemic, he realized “this was above and beyond the future of Pfizer…and I knew that if we are successful, we will be able to contribute to the world what is needed and if we fail, we have bigger worries because the whole world would be in a mess.”

On the advice of his scientists, a SARS-CoV-2 vaccine partnership with BioNTech SE was set in motion in the most unconventional manner, Bourla told Stelios Papadopoulos Biogen, Inc.’s CEO, who conducted the fireside chat on 22 June. Though the two companies were working since 2018 on an influenza vaccine using the now revolutionary mRNA technology, Bourla personally didn’t know the management, so he placed a call to BioNTech founder and CEO Ugur Sahin.

“It was a very, very pivotal moment…and we hit it off. We discussed on principles rather than on what we're going to do, and then he talked to me about his life and then I talked to him about my life, and we decided to call again. At some point I told him if we are to do something like that, time is of essence. It's going to be very challenging to put together all the legal documents in the contract and if we start after that we're going to miss the train."

He said, “maybe we start and worry about the contract later. So, we started working immediately.”

"Undoubtedly, for me the biggest surprise was the level of efficacy this vaccine was able to accomplish. We were expecting something in the 70s and FDA was ready to give approval at 50[%] if you remember. 95[%] was something that really, really surprised us." – Albert Bourla, Pfizer CEO and Chairman

Watertight contracts are the norm before moving ahead on a deal but BioNTech transferred the technical know-how to Pfizer the next day, even though a letter of intent was signed three weeks later as Pfizer’s lawyers were “having a heart attack that we were exchanging all this information without a legal, formal document.”

The two companies signed a formal commercial agreement only in January 2021, a month after their mRNA vaccine, now known as Comirnaty (tozinameran), received an emergency use authorization from the US Food and Drug Administration. (Also see "COVID-19 Windfall Will Help Pfizer Remain Top Drug Company" - Scrip, 2 Feb, 2021.)

It wasn’t just top management that made a difference though. The CEO acknowledged Pfizer’s employees, who showed just 1% absenteeism, despite the pandemic, as they “knew their work affects lives.” Emphasizing the role played by the FDA, Bourla said it didn’t get the credit it deserves. Agency officials were “equal heroes” as they conducted overnight inspections, conveying feedback quickly.

As the B.1.617 variant of SARS-CoV-2 spreads to countries including the UK and US after having caused havoc in India, vaccine effectiveness against this variant is under the lens with breakthrough cases reported post full vaccination. Meanwhile, CEPI’s offer to help in testing against variants has potential to harmonize assessment of COVID-19 vaccines performance.

When asked by Chris Viehbacher, managing partner at Gurnet Point Capital and the former CEO of Sanofi, how such a large corporation adopted the mindset of a fast-moving biotech, Bourla credited his predecessor Ian Read for creating a nimble-footed R&D organization.

“In a way, we were preparing for it…when I took over in 2019, I found a very different R&D machine. We also brought in new talent, particularly in digital and the first goal they had was to digitize the R&D operations…so we had a group ready to run a study in a very different way. I don't think we would be near the speed to conclude the study if we hadn’t made all this investment in infrastructure a year and a half before,” Bourla said.

Asked if the US government's Operation Warp Speed (OWS) was meaningful or just a political headline-grabbing effort and how it affected Pfizer, Bourla said “it was not very homogeneous so for some it was political but for many of the people that were working on the operation, they had the best of intentions and they tried very hard to help [though] I don't think they gave the same help to everyone.”

Pfizer chose to not take federal money as it felt independent and quick decision-making was paramount. “It's not that the advice of others is not worth it, it’s actually worth a lot, but taking money from the federal government always comes with strings attached.” Given that taxpayer money is involved, the government has a responsibility and as a result it wants to be actively involved in the process. (Also see "Operation Warp Speed Angles For Greater Role In Pfizer COVID-19 Vaccine Manufacturing" - Pink Sheet, 18 Dec, 2020.)

“They want to discuss how we are going to do the clinical trial and if you want to make a change they want to go back to the committee and see why you changed the protocol [whereas] these things were happening within five minutes in our decision process,” he added.

While OWS was a “good thing” for Moderna, Inc., as it needed financial support, Pfizer didn’t need the money. “It was a very big-ticket item, so if we failed, Pfizer would have to write off $2-2.5 billion, but wouldn’t go bankrupt,” Bourla told the USAIC session.

Seven Billion Doses On The Way

Tremendous effort and speed were involved in manufacturing the COVID-19 mRNA vaccine as well, with the company having to design formulation machines from scratch as it was working with a technology that didn’t have manufacturing infrastructure anywhere in the world.

A recent study says a cohort of unvaccinated individuals aged under 16 years in Israel showed a nearly two-fold decrease in COVID-19 positivity for each 20 percentage points of individuals vaccinated overall. As Pfizer, Moderna and Bharat Biotech develop pediatric vaccines, should they consider if herd immunity might make such vaccines redundant?

Interestingly, since the company couldn’t afford to waste time constructing buildings, it had to transport pre-built modules from Texas, closing all the streets of Michigan during the process. As a result, “we did in five to six months what would have us taken us four years.” Pfizer now has an annual peak capacity of three billion doses in 2021, compared to just 200 million last year.

Besides, BioNTech is in talks to set up production sites in Asia, South America and Africa and could potentially issue licenses to other manufacturers to boost global supply, CEO Sahin has said. (Also see "Indian Alliance For Pfizer/BioNTech’s COVID-19 Vaccine?" - Scrip, 11 Nov, 2020.)

Pfizer plans to make four billion doses of Comirnaty next year and “if others also do what they plan to do, we will have enough doses” for the entire world by 2022, Bourla added. (Also see "Moderna Sees COVID-19 Vaccine Surplus By 2022 If Constraints Ease" - Scrip, 26 Apr, 2021.)

Meanwhile, Pfizer has committed to making two billion doses available over two years to low- and middle-income countries including India, which has been hit hard by a second wave of the pandemic. (Also see "Coronavirus Update: Pfizer/BioNTech Commit 500m Doses For US Donations" - Scrip, 14 Jun, 2021.)

Prices for J&J and Pfizer’s COVID-19 vaccines will be watched closely as India permits private sales. While demand is set to spike with age criteria for those eligible to receive the shots expanded, local manufacturers Serum Institute and Bharat Biotech are ramping up capacities with the government’s help.

“We are in final stages of finalizing this agreement. First, we need to get approval of this vaccine in India and then we have to sign an agreement that will allow us to present doses of our vaccine,” he replied when asked about when the country would get doses of Comirnaty.

While AstraZeneca PLC/Serum Institute of India Pvt. Ltd.'s vaccine Covishield (AZD1222) would form the “backbone” of India’s immunization efforts, Pfizer and “hopefully" Moderna will also contribute significantly to it, he added.

Pfizer’s insistence on indemnity has been a sticking point. While the national regulator, the Drugs Controller General of India (DCGI), has taken the unprecedented step of waiving bridging studies altogether, the government is yet to take a stand on indemnity. With other vaccine makers like Bharat Biotech and Serum Institute also demanding indemnity, it will be interesting to see how the issue is resolved. (Also see "As Delta Plus Variant Identified, Changes To India’s Trials Policy Could Help" - Pink Sheet, 16 Jun, 2021.)

India is unlikely to opt for compulsory licensing of COVID-19 vaccines but has been pressing for a waiver of intellectual property rights on such vaccines and treatments. In an open letter to employees in May after US Trade Representative Katherine Tai said the country would support such an effort, Bourla said despite his urging heads of middle- and low-income countries to reserve doses, most of them decided to place orders with other vaccine makers, either because mRNA technology was untested at that time or because they were offered local production options.

Pfizer Limited, India. sought an accelerated approval or emergency use authorization in India as well, but had insisted on not conducting bridging studies, something that the DCGI was unwilling to agree to at the time. (Also see "Pfizer, Serum File EUAs For COVID-19 Vaccines In India" - Scrip, 7 Dec, 2020.)

“Unfortunately, other vaccine producers were not able to meet their supply commitments for varying technical reasons. Most of the countries that did not choose us initially, came back and thanks to our phenomenal supply ramp up, we have started signing supply agreements with them. We expect the supply balance to weigh in their favor in the second half of 2021 and to have virtually enough supply for all in 2022,” the letter had said.