Contract research organization Cromos Pharma is looking to transfer patients and studies to west Ukraine or neigboring Poland – but maintaining data integrity in a war is against the odds. 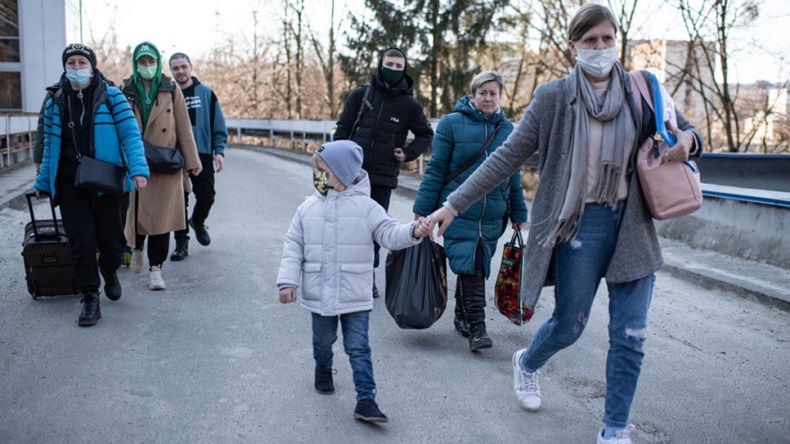 While the world watches in horror at Russia’s intensifying assault on Ukraine and the terrible impact on its people, a small number of biopharma and contract research organization personnel in the country are trying to maintain care for people who have taken part in clinical trials – and are even trying to ensure some can remain in studies.

One man attempting to ‘keep the lights on’ amid the devastation is Vlad Bogin, CEO of Cromos Pharma, a mid-sized CRO which specializes in overseeing trials in central and eastern Europe, including Russia and Ukraine.

On a Zoom call from Cromos’ headquarters in Portland, Oregon, Bogin sounds like an all-American entrepreneur, but occasionally his accent reveals his Russian roots. Born and raised in Moscow, Bogin left Russia to study medicine in the US in the 1990s, undertaking his training at Yale and Rochester, and by 2004 he had set up Cromos Pharma.

Bogin has seen the situation deteriorate rapidly in Ukraine since the invasion began on 24 February, with most trial participants inevitably having to suspend their involvement, and many big pharma companies having announced a halt to studies and enrolment in both Ukraine and Russia.  (Also see "Pharma Companies Are Suspending Trials In Russia - But For Practical More Than Ethical Reasons" - Scrip, 21 Mar, 2022.)

This is not just because of the shelling of cities and the breaking up of supply chains, but also the financial sanctions which have seen systems for paying staff and investigators frozen in both countries.

The war is hitting the Cromos’ business hard, but Bogin’s concern is first and foremost for patients and Cromos personnel in Ukraine, most of whom work in its city center location in the capital Kyiv.

“I am keeping in touch with my friends and colleagues in Kyiv, who are now sitting in bomb shelters. It’s absolutely heartbreaking,” he told Scrip.

He does not hesitate to criticize Vladimir Putin’s invasion as “absolutely mindless, senseless, criminal,” even while Russia, along with Ukraine, represents around 40% of his company’s business.

While millions of women and children and elderly people have been able to flee to countries such as neighboring Poland, Ukrainian men of fighting age are obliged to stay and defend the nation. This includes most of Cromos’ male employees, many of them physicians, who have been called up to serve in territorial army units to help defend key cities such as Kyiv.

Despite most of its employees being unable to work, Cromos is continuing to pay salaries to allow ‘normality’ to continue for as long as possible.

“While they're in danger, we've made a commitment that we're going to continue to pay regular salaries. And we're discussing with any [female employees] who are willing, to at least temporarily relocate, and some have already relocated to Poland and to Hungary,” where the company also operates.

Clinical trial research has been a booming business in eastern and central Europe in recent years, with Russia and Ukraine becoming particularly attractive locations for studies.

They both have large populations (145 million in Russia, 45 million in Ukraine) and highly centralized medical systems which make trial recruitment and administration more efficient than in some more established clinical trial locations.

New analysis from clinical trial data analytics firm Phesi shows that 2,911 or 4.4% of locations carrying out core global trials work were based in Ukraine and Russia, with the majority Phase III studies. The company warns that a further 1,738 (2.6%) sites in Poland are also now at elevated risk as the war continues.

“Sites in Ukraine, Russia, and Poland contribute significantly more patients on average, which exacerbates the impact beyond the number of sites in just these countries,” commented Paul Chew, Phesi’s chief medical officer.

“The quality of the research and the quality of the bookkeeping is also often higher than in the West,” added Bogin. “And the majority of patients are also more motivated to be in a trial because they see that they're getting much better care, without any extra cost.”

“If you understand clinical trials, you know how complex this whole process is. It’s extremely difficult to suddenly find new investigators and new medical centers, as well as housing for those patients"

More than 3.6 million people have been made refugees by the conflict over the last four weeks, including many people who were taking part in studies in Ukraine.

So is there any chance these individuals can somehow remain on their trials in new country? It is a huge undertaking, but one that Cromos is attempting.

The company has applied to trial regulators in Poland to gain emergency authorizations to allow trials to continue in their jurisdiction, but Bogin said this was an uphill task.

“If you understand clinical trials, you know how complex this whole process is. It’s extremely difficult to suddenly find new investigators and new medical centers, as well as housing for those patients. It becomes a very expensive ordeal, and not every sponsor is willing or able to do that, especially the smaller [biopharma companies].”

As well as its offices in Hungary and Poland, Cromos also has a presence in Romania, Bulgaria, the Czech Republic, Slovakia and Slovenia, and Bogin expects the company to shift its focus to these locations where possible.

“You still need to inject the participants on a certain day of the month, you still need to do an MRI or a CT scan at certain timeline. And when this doesn’t happen, it becomes very difficult from a statistical perspective. It is also very difficult to compare apples and oranges in a randomized controlled trial.”

Having lived through COVID-19, CROs are already more used to coping with unpredictable developments, and managing trials remotely, but there are limits to this flexibility.

Chew urged sponsors to retain links with investigators and academics in the countries, and continue to fund sites, even those that are suspended.

Clearly, you cannot run clinical trials when you are being shelled. But when this craziness stops, I really would encourage pharma to support Ukraine with trials. And we'll do everything to make them as high quality and as robust as we can from our side."

“They must speak to regulators and CROs about how to maintain data integrity. Sponsors should explore how existing data, as well as synthetic data, can supplement studies to get trials over the line. There may already be enough data available to close knowledge gaps and get urgently needed treatments out to patients.”

Bogin said Cromos had worked hard to help one sponsor to continue an existing study, which he described as ”cardinal” to the biotech company’s research program.

“It is in a very complicated group of cancer patients. We were actually able to transfer some of those patients to Western Ukraine and continue to administer medications to them, ensuring their medications went with them where possible, and using other depots to distribute the IMP [investigational medicinal product] from other centers.”

As a remarkable demonstration of the country’s resilience, some trial courier services are still operating in Ukraine. “There are also still some patient mobility companies transferring trial participants from place to place which, to me, is mind boggling,” said Bogin. “From what I see on the news, it must be incredibly dangerous.”

Many big pharma companies have signaled that they would withdraw investment and activity in Russia in line with wider sanctions, but will maintain essential medicines supplies. Bogin backs this stance, and warned that if the punitive sanctions were ever extended to medicines, it could backfire.

As a Russian by birth, and with his parents-in-law still living in Moscow, Bogin wants people in the West to know how tight Putin’s grip on power is in Russia, and how it stifles protest and controls the media. “I can’t blame most people in Russia for not protesting in the streets. I don't know if I would have had the courage to do so,” he said.

“I'm not sure punishing them would have the desired effect. The way it's spun inside the country, the government can say, look at them [the West] they’re withholding medications from our sick people, how inhumane are they?”

Even in these dark times, Bogin is looking ahead to rebuilding as soon as the conflict is over, and in the meantime Cromos will stay in Ukraine by creating satellite offices in places like Lviv in the far west of Ukraine if necessary.

“We want to restart, and I'm hoping that the world community will be supportive of this as soon as it's feasible. Clearly, you cannot run clinical trials when you are being shelled. But when this craziness stops, I really would encourage pharma, biotech to support Ukraine with clinical trials. And we'll do everything in our power to make them as high quality and as robust as we can from our side."

He concluded: “Russia may be a different story, obviously. The status of a pariah may remain forever, or may be short lived, who knows. Obviously, I’m hoping for the latter, but I'm also not naive about how strong a hold Putin has on the country.”

EU Advises Use Of Pandemic Flexibilities For Trials In Ukraine

Rest In Peace SPACs And Pseudo-Platforms: What Lies Ahead For Biotechs Going Public In 2023