COVID-19: The Race To Develop A Vaccine

A Visual Guide And Q&A On The Frontrunners

The world is waiting for a coronavirus vaccine – but can we depend on it, and when will it arrive? A visual tracker of key developments from leading candidates. 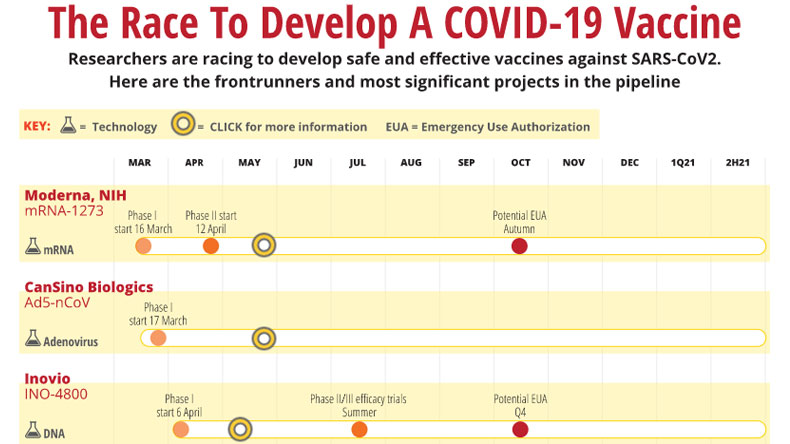 When will a vaccine against COVID-19 be ready? That's what everybody wants to know, because without one, the world remains at the mercy of SARS-CoV2, which as of  6 September 2020, has infected 27.2 million people, and claimed the lives of 890,000 worldwide. Meanwhile the long-term impact of the pandemic on other health conditions, and on the global economy, is only slowly becoming clearer.

There are currently more than 1,000 vaccine candidates in the pipeline, with 24 of these in clinical development. Here's a graphic highlighting those in the most advanced stages of development, and those considered to be the most promising candidates, which we'll be updating regularly.

This is followed by a Q&A covering the multitude of challenges in areas such as clinical trials and manufacturing which face vaccine developers.

That is the question on everybody’s lips.

The frontrunners and big pharma-backed players can be split into two broad camps – those who believe they can launch a vaccine before the end of 2020, and those who forecast that their candidates will not be ready until well into 2021.

On 11 August, however, Russia took the world by surprise when it declared that it had approved its own adenovirus-based vaccine. Named Sputnik V, the vaccine has been given provisional approval based only on Phase I/II data in 76 subjects, and has not yet demonstrated whether or not it can protect individuals against SARS-CoV2 infection (Also see "Russia To Roll Out COVID-19 Vaccine Based On Phase II Data" - Scrip, 7 Sep, 2020.)

Beyond this outlier, there are seven further projects in Phase III, and believe they can cross the finish line in 2020 or early 2021.

On the most recent tally taken by the World Health Organization eight programs are in Phase III trials: AstraZeneca/Oxford,  CanSino, Sinovac, Moderna and Pfizer/BioNTech, the Gamaleya Research Institute and two separate candidates from Sinopharm (see table above for the latest updates).

While there are encouraging early signs from animal challenge studies and Phase I and Phase II human studies, the big test is whether they can be shown to block infection (or at the very least limit the disease) in people who are exposed to the SARS-CoV-2 virus in the pivotal Phase III trials.

The Oxford and AstraZeneca partnership had set the most ambitious target, saying their candidate, AZD1222, could be ready for emergency use approval as soon as September. However this goal looks increasingly unlikely to be met.

Also notable is BNT162b2, the mRNA-based vaccine from BioNTech and Pfizer, who have now taken their lead candidate into a pivotal Phase II/III trial also think they can gain an emergency use approval by October 2020. Meanwhile Moderna, arguably the most high profile of these frontrunners also entered Phase III trials as of 27 July, and forecasts that its candidate MRNA-1273 could be ready by Thanksgiving in late November, or even earlier.

Is there one vaccine platform which looks more promising?

The mRNA platforms developed by Moderna Inc. and Pfizer, and the adenovirus technologies used by Oxford and CanSino are all unproven compared with more established vaccine approaches. However these newer platforms allow a more rapid scale-up in early development. This, combined with these companies’ experience with other coronaviruses such as MERS, has helped them take the lead.

Phase I read-outs from Pfizer and Moderna show their candidates exceeding the levels of antibodies seen in convalescent patients recovering from COVID-19, an encouraging sign, but which may or may not translate into protection against infection. Oxford/AstraZeneca's initial Phase I results were also encouraging, but showed a less robust immune response. The results showed the candidate equaled but did not exceed neutralizing antibody titers seen in convalescent patients after a prime and a boost dose.

While data from small trials are difficult to compare, it appears that T-cell responses to BNT162b1 may be stronger than those reported so far for Moderna’s competing mRNA-based vaccine.

What are the biggest challenge for the pivotal Phase III trials?

There are numerous potential pitfalls for the vaccines, most crucially whether or not they generate sufficient levels of neutralizing antibodies to prevent infection.

The greatest test will be in the older age groups (50, 60 and 70+) who are most at risk, but who tend to respond less strongly to vaccines.

Moderna, Pfizer/BioNTech and AstraZeneca has now begun randomized placebo-controlled trials in the US, each aiming to recruit 30,000 subjects in a protocol laid out by the US government's Operation Warp Speed.

The trials also depend on these volunteers being exposed to the Sars-CoV-2 in their daily lives, but this could be a problem in the UK and China, where prevalence of the virus is falling fast in many areas. The US is a more complicated picture, as infections are rising once again in states such as Florida, Arizona and Texas, but infections have dropped to a much lower level in previous hotspots such as New York.

Can these companies really deliver in 2020?

There has been plenty of skepticism about their chances, as nothing like this has ever been achieved at such a pace before; and the hoped-for timelines condense what would often take 10 years down into just 10 months. But preliminary data from Phase I and Phase II studies from the frontrunners suggest it remains possible.

Having a handful of advanced candidates using different vaccine platforms provides the ‘multiple shots on goal’ which could allow one or more to emerge as safe and effective products.

One of the key figures in the field is the US National Institute of Allergy and Infectious Disease (NIAID)’s Anthony Fauci. He had been skeptical about a 2020 timeline until recently, but now believes it is possible.

Fauci told a JAMA online briefing on 2 June: “I am cautiously optimistic that with the multiple candidates with different platforms that we’re going to have a vaccine that shows a degree of efficacy and would make it deployable.” 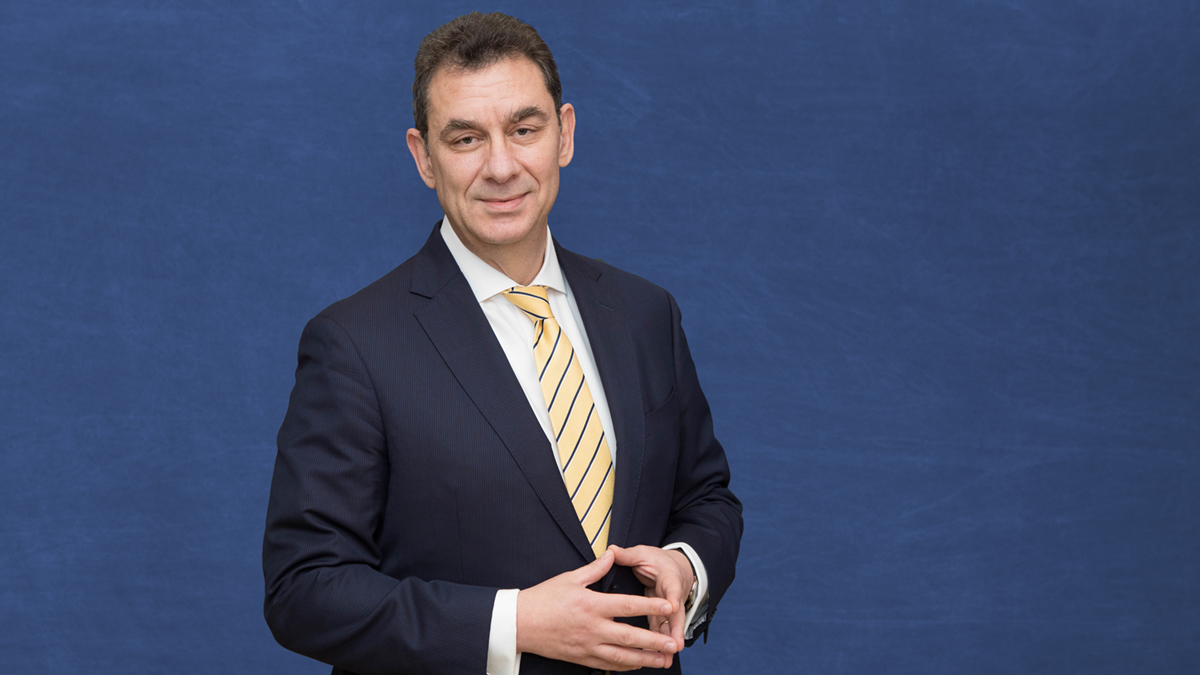 Since then, tensions around when and how the first vaccines will be approved in the US have grown. Pfizer's Albert Bourla said in early September that his company's vaccine candidate could still be ready for approval in October - but that it would not be swayed by political pressure to file early.

Pfizer CEO: Vaccine Could Be Ready In October But Won't Be Hurried By Political Pressure

Bourla reassures on scientific integrity amid fears of a politically motivated Emergency Use Authorization.

Nevertheless, despite the symbolic significance of the first vaccine or vaccines potentially gaining approval before the end of 2020, it is now clear that mass vaccination programs will not get underway until mid-2021.

But finalizing a safe and effective vaccine is just the start of the process. Manufacturing enough doses for the world, distributing and administering them is surely an even bigger challenge?

That is correct. Billions of doses are going to be needed worldwide. According to the International Federation of Pharmaceutical Manufacturers and Associations (IFPMA) that figure could be as high as 15 billion doses. That is why massive investment, planning and collaboration is needed between governments, non-governmental organisations (such as the Coalition for Epidemic Preparedness Innovations, CEPI, GAVI and the Bill and Melinda Gates Foundation) and the biopharma sector.

Which other big players are involved?

The other established big pharma vaccine companies have taken a slightly more conservative approach, wary of signing up to unprecedented timelines that inevitably come with political and societal expectation.

Johnson & Johnson’s Janssen division was the first big pharma company to begin work on a vaccine candidate in January 2020, and has an adenovirus-based candidate (Ad26 Sars-CoV-2). It began its Phase I trial on 31 July, and plans to initiate a Phase III study by September. It forecasts that its candidate could be ready for emergency use approval by the first quarter of 2021.

Sanofi and GlaxoSmithKline PLC, two of the world’s biggest vaccine companies, joined forces in April to bring together Sanofi’s recombinant DNA antigen and GSK’s pandemic adjuvant technology. The partners commenced Phase I trials on 3 September, and say a potential approval could follow in the second half of 2021.

Merck & Co. was the last of the big established vaccines manufacturers to join the race, announcing its multi-pronged approach on 27 May. This included the acquisition of Themis, a vaccine specialist whose measles virus vector-based candidate has now also entered Phase I.

How would these first vaccines reach patients?

This could be achieved very rapidly via conditional approvals, for instance the US Food and Drug Administration’s Emergency Use Authorization (EUA). The first few million doses of any vaccines would be reserved for frontline healthcare professionals and other priority groups – although how these first millions of doses could be shared out between countries remains a contentious issue. On 30 June the FDA issued some details guidelines on what minimum safety and efficacy standards it would demand - and FDA Commissioner Stephen Hahn has repeatedly pledged that corners will not be cut in order to accelerate any vaccines' approval. (Also see "Coronavirus Update: Spooked By America’s COVID-19 Vaccine Skepticism, FDA Promises Not To Lower Standards" - Scrip, 1 Jul, 2020.)

Significantly, two vaccines candidates have been given FDA fast track designation - Moderna and Pfizer. Hahn has indicated that Moderna's vaccine will be reviewed using real time data assessment, (Also see "Moderna’s COVID-19 Vaccine To Get Real-Time Data Assessment By US FDA" - Pink Sheet, 27 Jul, 2020.) an approach likely to be applied to other programs conducted with US government involvement.

How much will the vaccines cost?

Some of the frontrunners have indicated that they will take a non-profit approach to supplying the vaccine during the pandemic, while others, most notably Pfizer, have indicated that they will aim to make a profit on their product, but otherwise price responsibly. AstraZeneca and the University of Oxford have pledged to make no profit from their vaccine during the pandemic, and has agreed major pre-approval supply agreements with the US, the European Union, the UK and Japan and others to supply its vaccine. These deals price the vaccine at around $2-4 per dose.

On 22 July, Pfizer and BioNTech agreed a deal with the US government for 100 million doses of their vaccine for $1.95bn. This implies a price of $19.50 per dose, which is likely to set a benchmark for the entire field.

The US government’s order of 100 million doses for $1.95bn means the implied price for Pfizer/BioNtech's vaccine is $19.50 per dose. That could set a benchmark for solid near-term revenue and profitability for companies in the space.

Will companies ever make a profit on these vaccines?

Companies have nevertheless resisted calls to give up their intellectual property on the products. It is clear that COVID-19 is likely to be contained by immunizations within the next few years, it will not be easily eradicated, if ever. This means companies could seek to charge higher prices once the pandemic has been declared over, but while localized outbreaks of the virus persist.

Even so, they will face pressure to maintain low and affordable prices for their vaccines, not least because most candidates are being developed with the assistance of public and government funded institutes such as the US Biomedical Advanced Research and Development Agency (BARDA) and CEPI and the Gates Foundation.  (Also see "Global ‘Fair Access’ Coronavirus Vaccine Fund Launched, AZ Doubles Output Target" - Scrip, 4 Jun, 2020.)

COVID-19 Vaccine Could Cost As Little As $10 A Dose, Says Janssen