But Q4 was the third sequential quarter with a decrease in financing totals. A review of biopharma start-up dealmaking and financing activity from October through December 2017, based on data from Strategic Transactions. 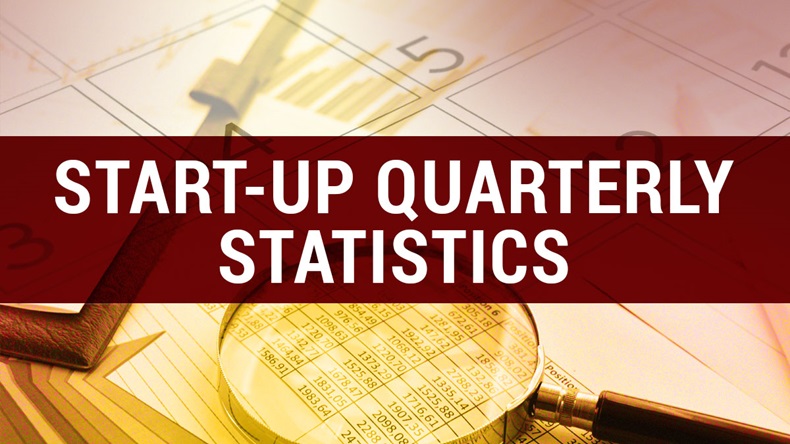 During the final quarter of 2017, biopharma start-up fundraising showed a 17% decline from the previous quarter, a total of $2.62bn compared to $3.17bn in the third quarter. It was a continuing downward trend, as the second quarter saw a total of $3.86bn in start-up financings, but the year ended better than it began – the first quarter total was just $1.66bn.

A review of biopharma start-up dealmaking and financing activity from April through June 2017, based on data from Strategic Transactions, showed that fundraising activity more than doubled compared with the first quarter.

Of the 45 financings in the fourth quarter, 20 were Series A rounds bringing in a combined $984.4m, or 38% of the Q4 total. (See Exhibit 1.) Taking the top prize in the category was Harmony Biosciences LLC (a subsidiary of Paragon Biosciences LLC) with a $270m fund-raise to support the development of therapies for sleep disorders and other CNS-focused rare conditions. [See Deal] The firm's sole candidate the selective histamine H3-receptor antagonist/inverse agonist pitolisant (also known as tiprolisant), to which Harmony concurrently in-licensed US rights from Bioproject. [See Deal] The narcolepsy drug is already sold in the EU as Wakix. In the US. it is in Phase III for narcolepsy – an indication for which it has a 53% likelihood of approval (1% above average) according to Biomedtracker. Harmony plans to submit an NDA during H1 2018. (Also see "Harmony Biosciences Raises $270m; Acquires US Rights To Narcolepsy Drug " - Scrip, 6 Oct, 2017.)

The silver medalist for Series A fundraising was Cullinan Oncology LLC, raking in $150m. [See Deal] UBS Oncology Impact Fund (managed by MPM Capital) and F2 Ventures co-led the round. The start-up's pipeline includes three cancer candidates, one which came from MPM and two others that stemmed from in-house research. IND filings for all three are expected within the next two years. (Also see "Cullinan To Search For Oncology’s Diamonds In The Rough" - Scrip, 3 Oct, 2017.)

In the third-largest first round, Jnana Therapeutics Inc. launched, raising $50m. [See Deal] The start-up is looking to create the first drug discovery platform with the ability to target the solute carrier (SLC) family of transporters, which consist of over 400 membrane-bound proteins that facilitate the transport of a wide range of substrates across biological membranes and play important roles in physiological processes ranging from the cellular uptake of nutrients to the absorption of drugs. Jnana will focus on immunometabolism, lysosomal function, and mucosal defense, which are key disease pathways where SLC transporters provide targets for immuno-oncology, inflammatory disorders, and neurological conditions.

Six publicly traded start-ups completed financings during the fourth quarter, raising a combined $700.7m. (See Exhibit 2.) Topping the list was the neurodegenerative disease-focused Denali Therapeutics Inc. with its $267.4m initial public offering. [See Deal] The IPO proceeds have been earmarked for a variety of activities including Phase I/Ib trials and preparation for a Phase II trial for DNL201 and DNL151, respectively (exclusively licensed from Roche's Genentech Inc. in 2016 [See Deal]) in Parkinson’s disease; Phase I and early Phase II for DNL747 in Alzheimer's disease and Phase IIa trials in AD and ALS; and preclinical and IND-enabling studies for four core antibody and enzyme replacement programs. The firm will use additional money to fund the initial payments should it exercise its option under an August 2016 deal to acquire all outstanding shares of antibody company F-star Gamma Ltd. (a division of F-star GMBH) for $450m. [See Deal]

Thirty-nine partnerships involving start-ups were signed during the quarter. In the alliance with the highest potential deal value, Daewoong Pharmaceutical Co. Ltd.'s HanAll BioPharma Co. Ltd. licensed Roivant Sciences GMBH exclusive rights to develop, manufacture, and sell the Phase I anti-FcRn monoclonal antibody HL161 for pathogenic IgG-mediated autoimmune diseases. [See Deal] The license extends to the US, Canada, Mexico, EU, UK, Switzerland, Latin America, the Middle East, and North Africa. According to industry sources, HanAll received $30m up-front and could get $20m in R&D funding, $452.5m in milestones, and a fixed royalty of $502.5m. HL161 has potential for treating severe autoimmune diseases for which there are currently no cure, including myasthenia gravis, chronic thrombocytopenia, optic neuritis, polyneuropathy, and lupus.

The HanAll agreement was one of three Roivant deals signed during the quarter. Arbutus Biopharma Corp. received a $116m equity commitment from Roivant, which post-transaction becomes Arbutus' largest shareholder with a 49.9% stake. [See Deal] Arbutus will use the cash infusion to further develop its preclinical and clinical hepatitis B virus candidates. Roivant will also explore a future collaboration to accelerate Arbutus' HBV pipeline and potentially help it expand geographically.

AstraZeneca PLC licensed Roivant worldwide rights to an undisclosed candidate. [See Deal] Specific terms regarding financial details, compound phase, and therapy area were not disclosed, only that the candidate was deprioritized by AZ and that the big pharma will receive money up front, development milestones, and royalties. In another October deal, AstraZeneca granted Mereo BioPharma Group Ltd. exclusive rights to the respiratory candidate AZD9668. [See Deal] AZ had been developing the project for COPD in Phase II but discontinued those trials. Mereo plans to study the compound for alpha-1 antitrypsin deficiency and following the completion of Phase II, AZ can opt to acquire the candidate outright. Mereo paid $3m up front and issued the big pharma $2m of its ordinary shares, plus potential development and sales milestones and royalties.

AstraZeneca was one of six big pharma companies that penned a pair of alliances during the quarter. The others were AbbVie Inc., Boehringer Ingelheim GMBH, Merck & Co. Inc., Johnson & Johnson's Janssen Pharmaceutical Cos., and Roche. Boehringer and AZ's two deals were both reverse licensing agreements in which they licensed a smaller firm rights to compounds. (See Exhibit 3.)

IPharma (H.K.) Ltd. received exclusive worldwide rights to Boehringer's focal adhesion kinase inhibitor BI853520, which has completed Phase I trials for multiple solid tumors (including advanced pancreatic adenocarcinoma, platinum-resistant ovarian cancer, esophageal cancer, and soft tissue sarcoma) and is expected to enter Phase I/II studies in 2018 in combination with immune checkpoint inhibitors. [See Deal] Specific terms were not disclosed, however BI will pay money up front in addition to milestones and sales royalties. IPharma was created as a 2016 joint venture between Chinese investor I-Bridge Capital and Israeli biotech BioLineRx Ltd. to focus on therapies for unmet medical needs in China.

This was one of two Xynomic deals penned in Q4. It partnered with Janssen in a trial collaboration to evaluate abexinostat with Janssen's ibrutinib for relapsed/refractory diffuse large B-cell lymphoma (r/r DLBCL) or relapsed/refractory mantle cell lymphoma (r/r MCL). [See Deal] Led by researchers at Memorial Sloan Kettering Cancer Center, the Phase I/II trial will assess the combination of the two compounds in addition to studying the biologic predictors of response and resistance to dual BCRi and HDACi inhibition. Ibrutinib is sold as Imbruvica by Janssen Biotech and Pharmacyclics Inc. (now owned by AbbVie) for MCL, chronic lymphocytic leukemia, Waldenstrom's hypergammaglobulinaemia, and graft-versus-host disease, and the therapy is in Phase III trials for various other cancers.

Vir Biotechnology Inc. penned two Q4 deals, both with the potential to exceed $1bn. It teamed up with Visterra Inc. to combine their expertise and develop infectious disease therapies. [See Deal] Under the agreement, Vir got exclusive rights to up to five Visterra monoclonal antibodies, including preclinical VISFLX for influenza A, VISRSV for respiratory syncytial virus, and VISFNG which targets fungal glycans for severe fungal infections. Vir also has an option to take on a minority financial interest in Phase IIa VIS410 for influenza A and upon option exercise it can co-promote VIS410 in select territories. Visterra will develop the candidates up to a pre-determined point, after which Vir takes over.

On the same day as the Visterra tie-up, Vir allied with Alnylam Pharmaceuticals Inc. for the development of up to five RNAi therapeutics for infectious diseases, including preclinical ALNHBV02 for HBV. [See Deal] Alnylam is responsible for bringing the candidate to IND filing, at which point Vir will take over and move it through clinical proof-of-concept. Both firms agreed to co-fund work up until POC, after which Vir is solely responsible for funding and development through the end of Phase II. Thereafter, Alnylam can opt into a profit-sharing agreement before Phase III commences. For the four remaining undisclosed programs, Vir will fund all development and Alnylam retains a product-by-product option on each program to enter into a profit-sharing arrangement following POC. (Also see "$500m And Counting: Vir Puts Big Money To Work In Infectious Diseases" - Scrip, 19 Oct, 2017.)

In the only joint venture of the quarter, Telix Pharmaceuticals Ltd. and Advanced Nuclear Medicine Ingredients SA partnered to create an as-yet-unnamed JV to commercialize ANMI's 68-Ga-HBED-CC-PSMA prostate cancer imaging kit in the US. [See Deal] Just days prior, Telix announced a deal with the University of Melbourne in which the start-up licensed rights to a radionuclide conjugation technology 89-Zirconium for use with radiopharmaceutical therapies for cancer. [See Deal] In addition to its two Q4 alliances, Telix proceeded to complete its initial public offering on the Australian Stock Exchange, grossing $A50m. [See Deal] The University of Melbourne was just one of 11 tech transfer entities to partner with start-ups.

Cell Design’s key assets are its synNotch gene expression technology (requires two antigens instead of one to activate chimeric antigen receptor (CAR) cells), and its Throttle “on-off switch” platform, which uses a small molecule as a switch to modulate CAR activity. Kite and Cell Design teamed up in 2016 granting Kite access to the Throttle technology for use in developing CAR-T therapies for leukemia and B-cell malignancies. (As a result of that agreement and Cell Design's concurrent $28.4m Series A round, Kite took on a 12.2% equity stake in the firm.) [See Deal][See Deal]

For Cell Design, Gilead paid $175m and could shell out another $322m in earn-outs upon achieving development and regulatory achievements. Cell Design’s technologies will help in Kite's R&D activities for solid and blood cancer therapies. (Also see "Gilead Acquisition Of Cell Design: The Next Logical Step" - Scrip, 8 Dec, 2017.)

In another cancer-focused acquisition, start-up OncoResponse Inc. bought Paganini Biopharma Inc. for an undisclosed sum. [See Deal] Paganini's work is based on intellectual property from the University of California, Los Angeles. The company has used the technology to develop an anti-epithelial membrane protein 2 fully human mAb which OncoResponse has named ONCR201. The oncology candidate is expected to enter the clinic in 2019, with potential as both a monotherapy and in combination with immunotherapies. OncoResponse's pipeline includes compounds for melanoma, non-small cell lung cancer, prostate and gastric cancers, and chronic myeloid leukemia.

From the editors of Start-Up

Gilead Acquisition Of Cell Design: The Next Logical Step

Cullinan To Search For Oncology’s Diamonds In The Rough