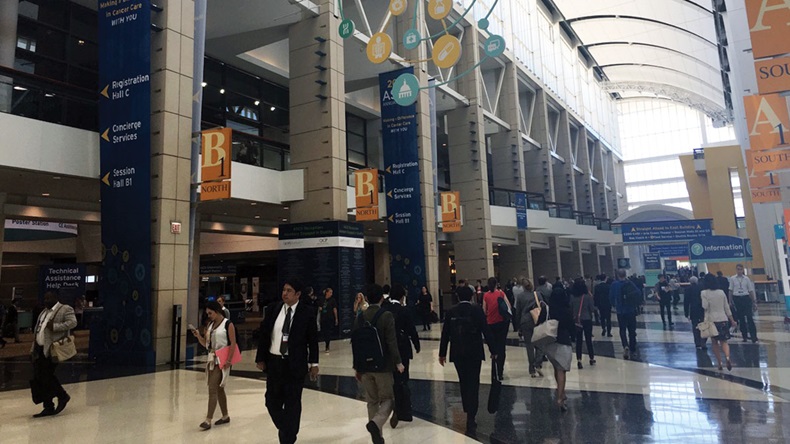 Janssen Pharmaceutical Cos. (a Johnson & Johnson company) reported positive Phase III data for Zytiga (abiraterone acetate) in hormone-naïve metastatic prostate cancer, providing a non-chemotherapy option for patients that is expected to change the standard of care. However, the market impact of Janssen's triple therapy could be limited due to a busy late-stage drug pipeline that includes novel mechanisms of action.

Data from the Phase III LATITUDE study, the subject of the June 4 plenary session at the American Society of Clinical Oncology's annual meeting in Chicago, showed that Zytiga plus prednisone in combination with androgen deprivation therapy (ADT) reduced the risk of death by 38%. The combination has already been filed in Europe where a label extension decision for the drug is expected later this year.

Median overall survival (OS) for patients treated with Zytiga plus prednisone in combination with ADT has not been reached yet, but median OS for the placebo plus ADT arm of the Phase III trial was 34.7 months. Median radiographic progression free survival (rPFS) was 33 months in the Zytiga arm compared with 14.8 months with placebo plus ADT.

ADT plus docetaxel chemotherapy has been the standard of care since 2015 for metastatic prostate cancer patients, but due to the exclusion of chemotherapy in the Zytiga triple therapy regimen, its use is expected to be welcomed by doctors. ASCO panelist Sumanta Kumar Pal said Janssen's combination is an "important alternative to chemotherapy" that will "shake up treatment regimens."

Lead study author Karim Fizazi said, "The benefit from early use of abiraterone we saw in this study is at least comparable to the benefit from docetaxel chemotherapy, which was observed in prior clinical trials, but abiraterone is much easier to tolerate, with many patients reporting no side effects at all."

It's Not All About IO: Seven Drugs To Watch At ASCO

Biomedtracker's review of ASCO abstracts revealed several drugs to watch outside of the immuno-oncology space at the annual cancer conference in Chicago, including market-expanding data for Roche's Perjeta and J&J's Zytiga, and Phase III data for AstraZeneca's PARP inhibitor Lynparza in breast cancer.

Still, doctors at ASCO raised concerns about the costs associated with Janssen's triplet therapy compared to ADT plus docetaxel chemotherapy. ZS Associates analyst Sharon Karlsberg noted that the tradeoff for removing chemotherapy from a treatment regimen in favor of Zytiga is 4.3 months of inexpensive chemotherapy versus 3 years of branded Zytiga.

Zytiga's main patent expired in the US in 2016, but according to IMSHealth the drug is protected by a combination patent family that could delay generic entry until August 2027, potentially protecting Zytiga on a global scale.

Despite LATITUDE's positive results, its relevance in high-risk metastatic hormone-naïve prostate cancer might be questioned soon as newer options move through the pipeline.

Progress in prostate cancer had been slow until recent years, but the space has changed dramatically in just a few years following the introduction of Zytiga and Pfizer Inc.'s Xtandi (enzalutamide). Now novel agents with newer mechanisms of action are creeping up the pipeline, such as Janssen's own apalutamide (ARN-509/JNJ-927), an androgen receptor antagonist that is in Phase III and expected to filed in the US later this year for pre-metastatic prostate cancer. Apalutamide also is being tested in several other Phase III studies for different prostate cancer populations.

Janssen also has Zejula (niraparib), a Poly ADP-Ribose Polymerase (PARP) inhibitor, in Phase II for prostate cancer under a partnership with Tesaro Inc. The companies plan to file this product with regulators before 2019.

Meanwhile, AB Science's masitinib is one of a variety of Phase III compounds in development for prostate cancer. This drug, in combination with docetaxel, is being positioned by AB Science as a first-line treatment for metastatic castrate resistant prostate cancer, among other populations.

Meanwhile, Craig Tendler, VP of late-stage development and global medical affairs for oncology, hematology and supportive care at Janssen, told Scrip that the company will continue to use Zytiga as its foundation therapy in prostate cancer as it progresses its prostate cancer pipeline.

Zytiga, which is one of the biggest-selling brands in the prostate cancer market, is already approved as a treatment for patients with metastatic prostate cancer that worsened despite ADT use. The drug is a small molecule oral irreversible inhibitor of the 17 alpha-hydroxylase enzyme that catalyzes the hydroxylation of intermediates involved in testosterone synthesis

"LATITUDE validates the hypothesis that if you have active agents in the advanced prostate cancer setting and you bring them into earlier stage disease the impact can be even greater," Tendler said. He added that the Phase III data in hormone-naïve patients allows Janssen to "use Zytiga as a backbone for other investigational agents that we're trying to bring forward, such as our PARP inhibitor with Tesaro."

"We want to identify patients with the right biomarkers that will see the greatest benefit from combination treatments," he said.

A second trial, the Phase II/III pilot study known as STAMPEDE, was also presented at ASCO with positive results promoting the earlier use of Zytiga in patients with prostate cancer starting long-term ADT.

STAMPEDE – an ongoing a multi-arm, multi-stage trial conducted in the UK and Switzerland and sponsored by the Medical Research Council – reported that of the 1,917 men included in the study, there were 184 deaths in the Zytiga plus ADT treatment group compared with 262 in those given ADT alone.

The positive results in this study were reflected on by LATITUDE panelists, who noted that the data add extra weight to the suggestion that Zytiga plus ADT should be made available to hormone-naïve prostate cancer patients.