Gene Therapies: Waiting To Emerge From The Bottle

Slowly but surely, gene therapy projects are winning back confidence from the industry and as investment increases, so increase the reports on progress in this area; from sensational claims of restoring sight, to slightly more spurious claims of reversing the aging process. 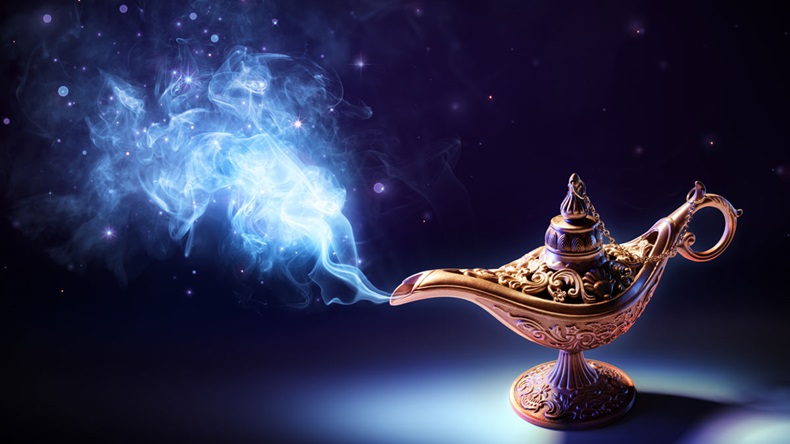 Gene therapy has been heralded as the ‘Next Big Thing’, not once, but twice. Since its dramatic fall from grace following extreme clinical trial mortalities at the end of the 1990s, investment in the area was widely reported as drying up, but as Figure 1 shows, gene therapy research never really went away.

The number of gene therapies in active development is at an all-time high, according to the historical ‘Trends’ data tracking tool in Pharmaprojects (Figure 1). 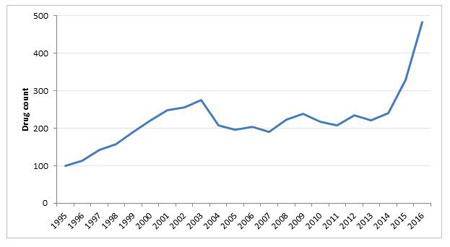 However, this is still a high-risk area, as seen recently in the example of Juno Therapeutics Inc's CAR-T-cell gene therapy candidate, which saw three Phase II trial fatalities and had its development temporarily suspended for a brief period. Another recent example was seen in Adaptimmune Therapeutics PLC’s partial clinical hold placed on its planned pivotal study of NY-ESO SPEAR T-cell therapy in myxoid round cell liposarcoma, but which was reported as not being due to safety concerns.

Figure 2: The Current Status Of Gene Therapies In The Pipeline 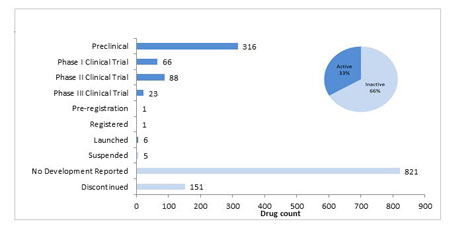 How Do They Work?

The basic concept of gene therapy sounds relatively simple: manipulate defective DNA expression by either introducing a correctly functioning gene or blocking expression of a faulty one.

These two different approaches for targeting gene expression mean that if the fundamental technology of gene therapy could be harnessed, the range and efficacy of therapeutic possibilities could be huge.

In vivo approaches could encompass not only the rare, genetic diseases via the insertion of correctly functioning genes, but also the biggest disease area, cancer, by the introduction of ‘anticancer’ genes, which can work by encoding for tumour supressing proteins. Cancer therapies can also be approached ex vivo, by extracting tumour cells, modifying them to express a new gene, and reintroducing into a patient to stimulate the immune system rejection of the tumour cells.

The benefit of a corrective gene therapy for patients with a rare, genetic defect disease is that in some cases only a one-off treatment is needed vs a long continuous prescription of more widely-used medicines. For cancer patients, gene therapies may provide a longer term solution to slow down the progression of the disease.

As shown in Figure 3, the number of rare diseases and cancers being targeted by gene therapies far surpass any other disease groups. The total for cancer is currently at 693 compounds, which includes both active and inactive compounds in this area. This is an interesting pattern as it ranges from the smallest and most niche disease areas to cancer, the largest and arguably most important disease area for the pharmaceutical industry. Many of the gene therapies in development for rare diseases have also been granted Orphan Drug Designation, in indications as diverse as; mucopolysaccharidosis, Crigler-Najjar syndrome, achromatopsia, retinitis pigmentosa, myotubular myopathy, and Batten's disease, to name but a few. 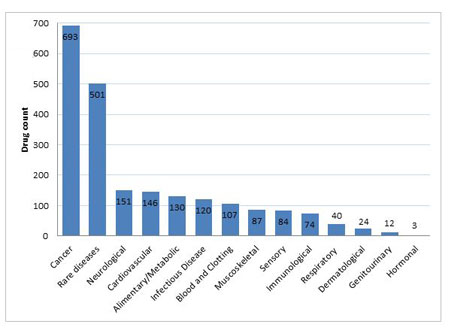 However, as the graph also shows, the majority of disease areas have been targeted by at least some gene therapy approaches, with an increasing number of advances being made in neurological areas of extreme unmet need such as Alzheimer’s, Parkinson’s and Huntington’s diseases. Old favorites such as heart failure have also been a research focus, while even infectious diseases such as HIV/AIDS also get a look in.

The Long Line Of Historical Failings

One of the biggest challenges to overcome is in the delivery of genes to their target cells, where delivery methods can generally be divided into viral vs non-viral.

Most commonly, the insertion of a gene occurs via a viral vector, but this can lead to severe immune reactions induced by the foreign virus and problems can also arise if the new genetic material leads to incorrect coding, resulting in potentially deadly mutations.

Another consideration when choosing which viral vector to use is to think about where in the body the gene therapy is required, and whether the virus needs to replicate itself. In the case of cancer treatments, the virus may need to be designed to make multiple copies in order to spread throughout the body.

A downfall of previous research was to look at disease areas which were not well suited to this novel type of therapy. Previous targets were more focused on high unmet need and the larger potential markets, rather than considering targets which were suited to this therapy approach. Most notable cases of gene therapy failure in a clinical setting involved trial participants dying from toxic shock, in the 1999 trial to treat ornithine transcarbamylase deficiency. A few years later in 2002, two young participants were reported to have developed leukaemia while taking part in a clinical trial for SCID. A more recent, high profile failure, Mydicar, which was heralded as a therapy which could replace heart transplants, failed in a Phase II trial and subsequently had its development discontinued in July 2015 .

The failings in SCID and ornithine transcarbamylase deficiency were likely to do with the huge immune response induced by the extensive body area any therapy targeting the blood would affect. More recently, successful studies have focused on areas of the body which are in part slightly shielded immunologically, such as the eye for sight disorders, or even the brain for Huntington’s, Parkinson’s and Alzheimer’s diseases.

A different example of a successful viral vector used in gene therapy can be found in Imlygic, which uses an oncolytic Herpes simplex virus-1, and was launched by Amgen for melanoma treatment in 2015. It works in two ways; firstly, it can selectively target and infect cancer cells, then replicating until the cell bursts, and secondly it induces an immune response by producing a protein which signals the immune system to send cells to the tumour site, to continue to fight the cancer.

The renewal in enthusiasm in this therapeutic area follows six drug therapies having been brought to market. The first two were launched in China for head and neck cancer: Gendicine, which was developed and launched by Shenzhen SiBiono GeneTech Co. in 2004, and Oncorine, launched by Shanghai Sunway Biotech in 2005.

Third came Rexin-G, which was developed by Epeius also as a cancer gene therapy, and was launched in the Philippines in 2007. Next to reach the market was Neovasculgen, a VEGF 165 gene therapy, developed by Human Stem Cells and launched onto the Russian market in September 2012 for use in the indications of PVD and Limb ischaemia.

2015 saw two further gene therapy launches - Imlygic for melanoma and the highly-publicized Glybera, which was launched for lipoprotein lipase deficiency and was the first launch onto the European market. However, it has experienced disappointing financial results, with only one reported prescription, because of its extremely high price.

Looking at the companies which have taken on gene therapy research, and have multiple therapeutics at the further stages of clinical development, Figure 4 shows that the smaller, more obscure companies are seen to be taking a larger role in the non-cancer and niche rare disease gene therapy research. However, the current frontrunner in the non-cancer gene therapy space is GlaxoSmithKline PLC, which is the only company within this cohort with an approved product. GSK has a stem cell gene therapy to treat adenosine deaminase deficiency now approved in the EU, and two Phase II candidates – one for the lysosomal storage disease metachromatic leukodystrophy, and the second for Wiskott-Aldrich syndrome, an immune system dysfunction disease.

Spark Therapeutics Inc has the largest number of candidates in the pipeline, with four candidates in total. They currently have three Phase II and one Phase III gene therapies under development for a mix of rare eye diseases and Haemophilia B.

Bluebird bio Inc has the largest number of gene therapies in Phase III, one of which is the widely-hyped LentiGlobin for thalassemia, which has shown very positive trial results in beta-thalassemia patients and has the added benefit of allowing multiple months between treatments, in contrast to the standard practice of monthly blood transfusions.

Also not shown on the graph below is Moldmed’s candidate for Graft-versus-host disease, which recently received EU CHMP positive opinion and COMP positive opinion on the orphan drug status or the adjunctive treatment in haploidentical haematopoietic stem-cell transplantation (haplo-HSCT) for adult patients with high-risk haematological malignancies.

Figure 4. Companies With Two Or More Non-Cancer Gene Therapies In Phase II Development And Beyond 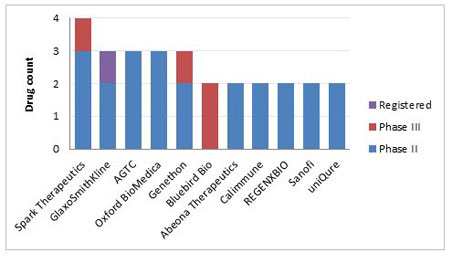 The anticancer gene therapy development is not carried out by big industrial players either, but is conducted by a slightly different set of smaller companies. Although cancer is a huge area of interest for big pharma, many of the bigger companies as of yet haven’t been willing to invest money in this research area. The current candidates in the anticancer development area are slightly behind the non-cancer disease areas at the moment also, with no candidates being further than Phase III.

NewLink Genetics Corp and Transgene SA are neck and neck in the anticancer space: both have two compounds at Phase II and Phase III respectively. Kite Pharma Inc is another big contender with five cancer targeting gene therapies, all of which are at Phase II. Prescient Therapeutics and Advatagene are also right behind with one Phase III and one Phase II compounds respectively. (Figure 5)

Figure 5. Companies With Two Or More Anticancer Gene Therapies In Phase II Development And Beyond 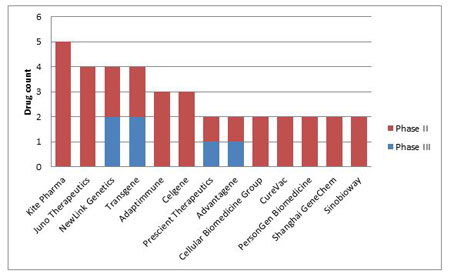 Despite a rise and fall in the number of gene therapies being developed over the last 20 years, the size of the pipeline in this area is now at an all-time high. While all disease areas have been targeted by the gene therapy approach, it is interesting to note that the largest and smallest areas, cancer and rare diseases, are the main areas pursued by companies. With recent approvals and launches of gene therapy compounds occurring in the last few years, it won’t be long until investment from the larger pharmaceutical companies matches that of smaller industry players.

Although there has been some significant progress in this therapy area, researchers are still struggling to eliminate all the problems experienced by the previous research. But if these issues can be overcome there is huge potential for a wide range of indications and patients to benefit from this new therapeutic class.

Data from Pharmaprojects, which tracks the entire R&D landscape covering all drugs for all diseases, from the preclinical to commercialization stage from 1980 to present day. For more information on the research covered in this article and how Pharmaprojects can help your business make the best drug development decisions possible, click here .