Big Data Brings Big Benefits, But Only If Used Properly

The number of health-related apps for mobile devices has exploded in recent years but can using them really make a difference to improve outcomes, make clinical trials more efficient and reduce the cost of healthcare?

Someone extremely well-placed to give a measured view is Glen de Vries, president of Medidata, the leading global provider of cloud-based solutions for clinical research in life sciences. The company, along with partner GlaxoSmithKline, recently won the 2016 Clinical Partnership of the Year at Informa’s inaugural Clinical and Research Excellence (CARE) Awards, impressing the judges with an initiative that delivered genuine insights into the optimal use of mHealth technologies.

Speaking about the GSK collaboration, Mr de Vries said that “this was an exercise in seeing what was possible: can we create a path to look at that kind of information?” He noted that “there is a lot of low-frequency data”, e.g. measuring the number of steps, activity trackers and evaluating sleep quality, but the GSK project was very much “high-intensity.”

The joint initiative, which took place at GSK’s Human Performance Lab in Brentford, UK, demonstrated that mHealth technologies do indeed have the power to collect large volumes of objective data that is reliable, secure and analysis-ready. Mr de Vries noted that Medidata gathered more than 18 million data points on activity and vital signs per participant per day, saying that such “an extraordinary level of in-life, real-time patient instrumentation for clinical trials will create new disciplines and new opportunities for life science companies.”

He said that “the more data you have, almost by mathematical definition, the more precise you can be”. Having a lot of data creates substantial evidence and by combining biology and technology, “we are making precision medicine real, leading to the right intervention or right prevention at the right time, for the right patients”.

Sharing Mr de Vries’ enthusiasm is Julian Jenkins, vice president of innovation, performance and technology in R&D at GSK. He said that the company is “already applying the learnings we made [and] elements of what we did are applicable across all our therapeutic areas.”

He said the project showed “how well we could stream data from patients directly into our clinical databases­—before you would take a device off and manually plug it into a computer to download the data.” But what insights can be garnered from this firehose of data that is being produced?

Several, Mr Jenkins said, but one key element is getting to know patients better and engaging them in the clinical trial process so they are participants in trials rather than mere subjects.

He gives the example of measuring physical function, which has traditionally been done in rudimentary ways, such as the six-minute walk test and keeping diaries—methods that are not accurate. However, if a patient wears a device, “we can get a profound insight” into their lives.

Mr de Vries agrees and makes reference to the six-minute walk test and Duchenne muscular dystrophy (DMD). A recent high-profile US Food and Drug Administration advisory meeting saw a vote go against a potential treatment for the muscle-wasting condition which had used the test and was criticised by panelists. 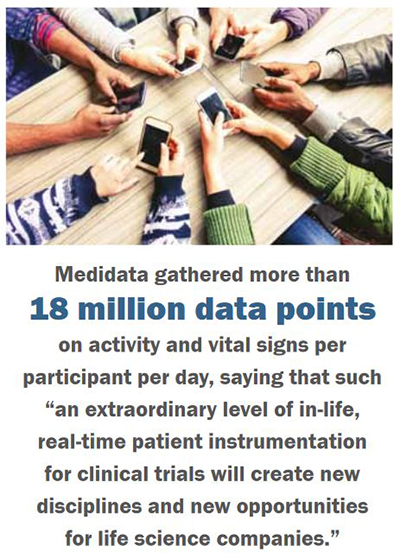 Mr de Vries said that instead of basing the submission of that drug on the six-minute walk test, which tells us very little, “wouldn’t it have been wonderful to go back in time and have a digital measure for all day and see real differences in change of behaviour?”

Mr Jenkins noted that data from mobile devices and apps give vital insights into what is important for patients—how they reach for things, dress, eat and so on—“rather than an arbitrary, made-up endpoint. It’s smarter, more informed, more objective.”

Improving dialogue with patients can only improve their recruitment and, more importantly, retention on clinical trials, as it reduces the burden on them. Mr Jenkins said patients are much more likely to stay in a study for longer if they can test themselves at home rather than travelling to a local or, even worse, remote centre. Cost-wise, taking travel expenses and paying a team of healthcare professionals needed to do the tests out of the equation also makes economic sense, he added.

Also, in these cash-straitened times, where different pricing models are being explored by pharma and payors alike, Mr de Vries noted that data produced through mHealth can help demonstrate a product’s true value. By creating more detailed evidence, differentiating a company’s drug from the competition will be easier.

“The smart life sciences companies will not be going to market with the primitive labels we have today but ones which will be much more sophisticated,” Mr de Vries added. He said that many of Medidata’s clients, hundreds of life science organisations that have used its platform in over 10,000 trials in 130 countries, are involved in mHealth, “and a couple of years ago that was 0%.”

Companies are exploring different of thinking about their drugs, he said, and some are including digital technology into their exploratory endpoints in Phase III studies. However there is some way to go before digital biomarkers will become potential primary endpoints in studies, Mr de Vries says.

How regulatory agencies such as the Food and Drug Administration and the European Medicines Agency will deal with data collected from non-traditional sources is not crystal clear. However Mr de Vries is encouraged by the stance being taken by regulators on mHealth.

“I am not concerned at all,” he said. “When we speak to the FDA or EMA, I see interest, willingness and excitement to look at these kind of data.” Mr Jenkins agrees, saying people at the agencies “get it. They wear the same devices our subjects do in studies, they are very happy to discuss new technologies.”

However, “we have to be scientific if we want to change endpoints with mHealth endpoints,” the GSK chief says. The tests that are run need proper validation compared to the gold standard and there is a need to come up with best practice that is industry-wide,” he added.

What is clear is that mHealth in clinical trial design is no flash in the pan and the earlier it is used, the better. Mr de Vries said “the most conservative in the industry that I speak to say ‘we will sit back, wait until the FDA approves a drug based on mHealth data’. However, if they wait, they will be literally years behind those doing it already, they will get knocked out of the market.”

This sponsored content is provided in association with Medidata.